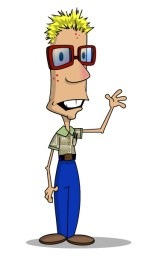 At school you’re likely to fall into one of two peer groups; the cool dudes, or the nerds. Without shadow of a doubt, I fell into the latter category. However, being a nerd at school maybe not such a bad thing, perhaps in the long run it’s actually for the best (although at the time it certainly wouldn’t appear so). Things change! Just as fashions change and what was once considered seriously un-cool suddenly becomes the height of fashion, so can the fortunes of the nerd.

However, just as some fashions never become trendy, so unfortunately some nerds never become cool and are destined for a life of abject nerdiness. As with most things in life though, things are never black and white, there are just infinitely varying degrees of shades of grey. So, perhaps there is also a nerd purgatory, a halfway house of mediocrity between coolness and nerdiness, a place where the majority of us probably reside.

I undoubtedly belonged to the nerdy group at school, although while I happily admit to certain nerdy tendencies, I would like to think that I’ve dragged myself out of the nerdy camp a little and swung the nerd-o-meter a little more to the cool side.

Taking stock and looking back on those that were generally considered trendy at school, I’m now kind of glad that I wasn’t in that group, for those that were cool then seem to have fallen from grace. A particularly vivid example being one of the uber trendy guys at school; the last I heard, he had become a roller skating waiter! That doesn’t sound terribly hip if you ask me.

I’m pretty certain that Steve Jobs, the co-founder of Apple, started life as a nerd; you don’t create a major multinational computer company without being one. However, Mr Jobs seems to have successfully transcended his nerdy status to become a cult figure and general cool dude, sporting trendy black polo neck sweaters and heading up the ultra trendy Apple brand, home of must have gadgets like the iPod, iPhone and iPad.

however to a remarkably similar one, that of Steve Jobs’ arch nemesis Bill Gates of Microsoft. An almost identical tale; nerd starts computer company, computer company becomes globally successful. Unfortunately this story doesn’t have such a happy ending, as Mr Gates seems to have retained his nerdy status, perhaps even elevating his position to Uber Nerd, a nerd to which all nerds aspire.

Is it that easy to spot a nerd though? Let’s try by example. Can you spot the nerd between the following…

…or is it a trick question?

The Brains character from Thunderbirds is deliberately portrayed as a typical nerd, complete with thick rimmed glasses to add to the classical image of a nerd, but what about the other? The other is a photograph of a young college student from St Petersburg Junior College in Florida taken from the yearbook in 1960. Is he a nerd or not a nerd? He certainly looks a bit nerdy.

This time we have the same Thunderbird character on the left and the SAME gentleman on the right as in the previous photographs, only taken a few years later. Is the guy on the right a nerd now? Most would argue not.

Jim Morrison, lead singer of the The Doors, was the archetypal rock star and general hell raiser and not someone you would conventionally class as a nerd. His musical legacy is still influential today and he was even immortalised in a Hollywood film about his life.

Yet, I have it on good account that the legendary Jim Morrison was a nerd back in his earlier days at St Petersburg Junior College in Florida. A good friend of mine happened to be at the same university (but one year ahead of Morrison) at the same time and remembers him as “definitely one of the nerdy pack”. So, imagine his surprise when Jim Morrison achieved such notoriety with The Doors a few years later.

And my friend? Like most of us, average nerdiness, having gone on to achieve an interesting yet largely unnoticed life in comparison to his former college student, the significant difference being that he’s still here to tell the tale, particularly to his five grandchildren.

It appears that nerds can do well and drag themselves out of nerdiness, but what about the nerds who remain nerdy? Embracing the nerdy side can clearly pay dividends. Take for example Jeremy Shoemaker. Who? Well, if you’re not a nerdy type, you’ll probably never have heard of him. Yet Shoemaker could safely be considered an uber nerd as he’s not only built a successful internet marketing company, but has a huge following of tens of thousands of like minded nerds reading his blog, shoemoney.com. Nerdy stardom!

To Nerd, or Not to Nerd?

So where are you on the nerdy scale and dare you admit it?

If you’re reading this blog, then the likelihood is that you have significant nerdy tendencies. The question is, what type of nerd are you? A Steve Jobs/Jim Morrison type of nerd, or a Bill Gates/Brains type of nerd?

As for me, well hopefully I’ve managed to shake off some nerdiness over the years and shifted the nerd-o-meter a little more in favour of the cool side, but I’m afraid some nerdy tendencies are probably too well engrained by now, leaving little hope for the future. I’ll leave it for you to decide:

Meanwhile, it’s off to do some more nerding in my nerd emporium…