Nowadays, every piece of consumer audio-visual equipment seems to come with a bewildering array of video connectors on its rear. How can you possibly know which is the best one to use and why?

Things are supposed to be getting easier, not harder. Yet trying to link your latest bit of electro-trickery into your existing audio-visual (AV) system is a bit like a camel attempting to do the tango; an exercise in futility.

How do you choose from the plethora of video connectors available to you on your latest Carlos-Fandago Super Ninja Turbo DVD player/toaster? Well, thankfully things can be broken down into some sort of order. There is a technical hierarchy amongst these video connectors that can be exploited, giving you a series of preferred choices, depending on the options available.

Constituents of a Video Signal

Any colour (or color if you’re American/can’t spell) that you see can be made by mixing together light of three different primary colours; Red, Green, and Blue.

Every single dot or pixel (picture element) on a screen is made up of these three colours. As such, every video signal/connection format needs to convey the information required to illuminate the three different colours for every pixel of the screen, in order to display a full image.

Couple this with the fact that the signal needs to be able to display moving pictures, so the signal will change every fraction of a second, potentially changing the colour of every pixel on the screen. That’s rather a lot of information to be sent.

Inevitably, to make this all work with such a large amount of picture information, some compromises are made along the way, with some connection systems making greater compromises. So, which system makes the least compromises?

Whether you like it or not, we live in a digital age and most consumer audio/video is now distributed digitally, be it on physical media like CDs and DVDs, or over the airwaves via satellite or digital terrestrial television (DVB).

As such, if you can keep the video signal in a digital format until the last possible moment (i.e. when it enters your TV), then you stand the best chance of achieving the best possible picture quality out of your system.

Slightly more sophisticated versions of component video that give improved quality over RGB use one cable/connector to carry a monochrome or colourless (black and white) signal  called luma, referred to as the Y-component. The other two cables/connectors, carry the colour signals and can be referred to as U & V, B-Y & R-Y or Pb & Pr.

Out of all the analogue video connection options available, component video is the best and preferred option, despite using the most amount of connectors.

S-video stands for separate video or super video. It is a type of component video, that carries the monochrome (luma or Y) signal on one wire within the connector and the colour or chroma (UV) signal on another wire. Like component video, s-video is also an analogue system.

It’s a neat system as it only uses a single connector, unlike the three connectors of the true component video system. However, it is inferior to component video, but more readily available.

Composite video uses a single yellow phono connector to distribute a video signal. This connector carries all of the video information down a single wire and like the above two systems, is also analogue.

Out of all of the analogue choices for distributing video between your audio-visual equipment, this is likely to give the poorest performance, and as such, should be avoided if alternative, better, options exist. 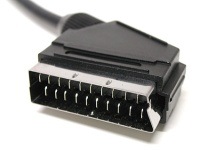 The SCART connector is a bit of a Jack-of-all-trades, distributing audio and numerous video formats amongst its 21 connection pins.

The SCART connector can distribute video in composite video, s-video and component video formats all within the same connector, but not all at the same time.

SCART connectors and their associated cables are not generally of the highest quality, so given the choice, the individual connectors above should be used in preference.

If you do choose a SCART connector, then buy a quality cable and set the configuration options in your AV equipment to select RGB if available, or s-video as the second option. Only choose composite video if you have no other alternatives! 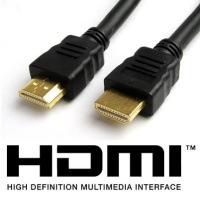 HDMI stands for High Definition Multimedia Interface. As its name suggests, it’s digital and designed for the latest generation of high-definition video formats, so you would expect it to be better wouldn’t you. Well it is!

HDMI transmits high definition digital video (and audio) in an uncompressed format, so there is no loss of quality.

If your audio/video equipment supports this format, then this is the one to use in preference.

If you have a new piece of audio-visual equipment that you want to link in to your existing system, or, having read the above, you want to reconfigure your system for optimal performance, then choosing the connection options from the top of this list will give you the best chances of success: