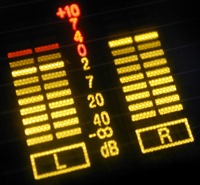 Struggling to work out the best settings for your podcast’s technical production? Ever wondered exactly what the top podcasters are doing and how they compare to each other? Wonder no more!

As a little exercise I thought it might be interesting to look at a few of the top podcasts about podcasting to see what their final production quality is like and how they compare to each other.

This following analysis is purely based on the quantifiable aspects of the “final product” of the podcasts and as such aims to be entirely objective. No consideration is given to the actual content of the podcasts, or indeed whether the hosts can actually string together a coherent sentence or not (as it happens they all seem to do remarkably well on this account).

While I’ve tried to be as accurate and methodical in my approach as possible I do not make any claims about its scientific rigour, but hopefully I’ve remained neutral and have explained all of my methods and reasons along the way.

The Top Four Podcasts about Podcasting

For this exercise I chose four podcasts about podcasting that I regularly listen to and the ones I believe are evangelizing podcasting and are, or should be, at the top of their game. They are, in alphabetical order so as to show no bias:

Before analysing the audio of the individual podcasts we’ll first look at the podcast files themselves, their formats and any meta data contained therein. The tools used for this analysis were MediaInfo and Mp3tag.

So, what does all this tell us?

Well, despite many commonalities, even amongst the leading proponents of podcasting there are clearly differences of opinion as to what approaches to adopt. There is obviously no perfect way of doing things, but perhaps more variations on a theme.

Cliff and Ray have gone for higher bit rates and stereo files, which while undoubtedly giving higher audio quality mean file sizes are proportionally larger and take longer to download.

Cliff Ravenscraft uses the least number of descriptive ID3 tags in the MP3 files, choosing to ignore even some of the most common podcast ID3 tags such as the year and track or podcast episode number. Ray and Daniel certainly win for the most number of ID3 tags and David and Daniel excel in their large comment fields.

Podcast cover art is pretty important as this is what listeners see on their playback devices. All of the podcasts incorporate cover art, although David Jackson opted for the Front Cover album art tag instead of the “Other” tag, which technically makes most sense I think, but ultimately depends on how the plethora of MP3 players available support these tags.

A simple waveform view of the sample audio files using the Audacity audio editor can give us a few clues about each podcast’s audio, providing useful comparisons:

In Daniels’s podcast (TAP) it’s interesting to note that his audio clipped briefly, indicated by the vertical red line. This is generally considered undesirable as it manifests itself as audible distortion.

Daniel’s audio was much more dynamic however compared to the others which were clearly heavily compressed and limited, preventing their audio levels from exceeding predetermined thresholds. We’ll discuss the dynamic range of the respective podcasts in more detail later in this article.

Different microphones and different voices all contribute to different frequency or spectral responses and in this respect I’m not entirely sure how much the following graphs can tell us, other then they’re pretty to look at: 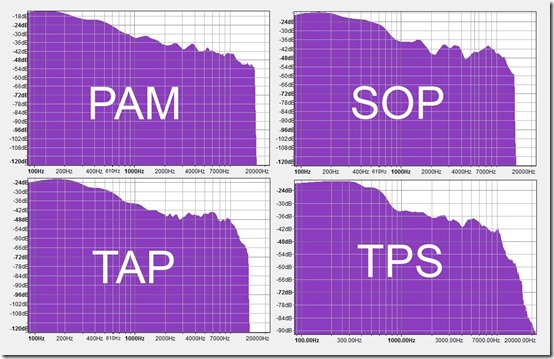 Two interesting points to note though are that Cliff’s podcast has an extended low end (bass) and Ray’s podcast has a significantly extended top end (high end or treble) potentially making his podcast brighter sounding.

Amongst the broadcast industry recent European (EBU R128) and International (ITU-R BS 1770-1) standards have been developed and adopted to measure and help control the perceived loudness levels of audio content within programmes.

These standards call for a programme loudness level of -23.0 LUFS (measured across the entire programme) with a permitted deviation of ±1.0 LU, where 1 LU is equivalent to 1 dB.

Programmes are also allowed a maximum permitted true peak level of -1.0 dBTP. True peak rather than sample peak is specified as inter-sample peaks can often exceed the maximum sample peaks, leading to digital distortion and clipping.

From the above table we can see that Cliff Ravenscraft’s podcast is the loudest and Daniel J. Lewis’ is the quietest. In fact Cliff’’s podcast is twice as loud as Daniel’s, with a 9.7 dB difference; 10 dB is usually considered as a perceptual doubling in volume.

Although the EBU R128 standard calls for a -23 LUFS loudness level in the broadcast industry, recent studies have recommended a -16 LUFS level (7 LU louder) for mobile devices due to the noisier environments in which they are likely to be listened to. In this respect, David Jackson’s podcast is pretty much spot on, Daniel’s is too quiet and the others are too loud.

Digital distortion and clipping should be avoided at all costs and in this respect Daniel’s been a naughty boy as he exceeded 0 dBTP. Looking at the previous audio waveforms above however, it appears that Daniel only clipped at one point (the vertical red line on the right hand side of his waveform image), so perhaps he’s only been a little bit naughty.

Everyone else has avoided clipping, although Cliff is sailing a little close to the wind according to the current standards.

Dynamic Range is not the same as Loudness! A podcast can be loud, but have little dynamic range.

The loudness ranges for the podcasts measured were fairly consistent yet on the low side, which is not at all surprising considering the programme material was essentially spoken word.

The peak-to-loudness ratio (maximum true-peak compared to the average loudness level) is a more representative indication of the programme’s dynamic range measured over the short term. Looking at these figures we can see that Daniel’s podcast is by far the most dynamic as is also borne out by looking at the waveform of his podcast compared to the others.

What can we actually infer from the above analysis?

Well, if you can listen to the podcasts quite happily, wherever you want and on whatever equipment you have, with no problems and you enjoy them, then it means absolutely nothing at all.

If however, you’re an audio or podcast nerd, then it might be more interesting.

For myself the ID3 tags are of little importance when I’m listening to a podcast. Absolute audio perfection isn’t that important either, but I do hate audio clipping particularly as it causes my particular MP3 player to drop out momentarily at each clipping point. So for this reason I think the EBU recommendation of a maximum audio level of -1.0 dBTP is quite important.

Secondly, I hate significant variations in volume levels between podcasts and as we’ve seen from these few examples volume levels can vary tremendously.

While loudness and dynamic range are certainly not the same thing, they are linked and in the case of Daniel’s audio it would have to lose some of its dynamic range in order to increase its overall perceived loudness. Conversely though Ray and Cliff’s podcasts’ loudness could be reduced a little whilst simultaneously gaining more dynamic range.

If you’d like to read more about these new audio broadcast standards and how they relate to podcasting, then there are some excellent articles on the Auphonic blog.

For what it’s worth those are my thoughts; they may change with time as I learn more, but that’s where I am at the moment. What are your thoughts or experiences?