My home network was never planned (it just kind of happened), but since its inception it  grew rapidly to meet my ever expanding needs. For along time it more than met my requirements, but as is inevitable,  I began to demand more of it than it could comfortably provide. So after much deliberation I have just completed a long awaited and much needed upgrade.

My home network originally grew from having a single Laser printer connected directly to my PC, to having my house wired throughout with CAT5e network cable, with every room having potential access to the Internet and a central file server. The file server was responsible for storing all of the household’s data (user files, music and pictures etc.).

My file server (an old 300MHz Compaq) was probably passed its sell by date when I first installed it, but after 5 years of continuous use it was certainly struggling to keep up. This, coupled with the fact that my storage capacity of 100GB was almost maxed out, meant that it really was time to upgrade!

The first part of my network upgrade was instigated by the redecoration and remodelling of my study after much planning with the aid of Google SketchUp (a free and remarkable bit of 3D modelling software). 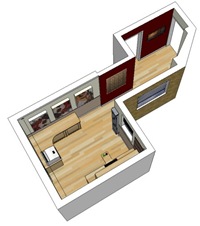 As part of the reorganisation I wanted to keep my new office space as uncluttered as possible. Prior to this (apart from my main PC) the study played home to the following office equipment to meet my printing and scanning needs: 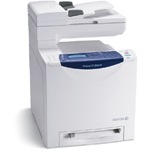 While the little HP Laser printer had given me sterling service over the years (and was in fact the origin of my home network) it was time to retire it. I decided to combine four devices into one with the purchase of a network connected Xerox Phaser 6128MFP-N colour laser printer with integrated scanner.

Apart from saving valuable desk space, this now enabled quick photocopies to be made without having to boot up my desktop PC.

As part of the long term plan to upgrade my network, I had previously installed a Gigabit (1Gbps, 1,000Mbps) network switch so that I could transfer large files (such as video) around the network 10 times faster than the standard 100Mbps.

Luckily, my installed cabling was already 1Gbps compatible and my desktop PC had a 1Gbps Ethernet card installed. Up until now however, no other devices on the network were 1Gbps capable. Time to remedy the situation…

As my old server was used not only as a general file server, but also as a development web server,  I decided to split the new server system into two; one running Linux for web site development, and a second running Microsoft Windows Home Server with a few terabytes of storage for music, pictures and video.

After much deliberation I opted for the HP Data Vault X510 for my Windows Home Server (WHS) box. The particular version that I chose came fitted with two 1.5TB discs giving a potential storage capacity of 3TB; a 30 fold increase over my old system.

This server now holds all of my music, photos, general user files plus a selection of DVDs and videos.

To store my DVD collection on the new WHS box, I use a free little utility called DVD Shrink. This great little utility rips a DVD in about 15 minutes to a file of about 5GB. The program also enables you to remove the menus and trailers so that you can get straight into a film. 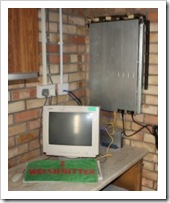 The second half of my server upgrade was via a retired Dell PowerEdge 2850 rack server that was kindly donated to me by a friend who luckily happens to own a large UK Internet Service Provider; Zen Internet (thanks Rich!). So please excuse the shameless plug.

The Dell server is a bit of a beast and rather noisy and as such was consigned to the garage. The garage wasn’t originally included in my home network (or its upgrade plan), but with my Google like megalomania taking hold I ran two additional network cables into the garage to facilitate the expansion of my burgeoning data centre.

This server is running a server version of Ubuntu Linux, configured with an Apache web server, PHP and MySQL database server; a configuration often referred to as LAMP (Linux, Apache, MySQL and PHP). I’ve also installed Webmin on the server so that I can remotely administer it via a web browser interface. 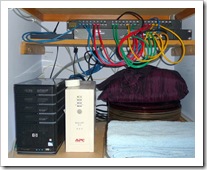 One of the reasons that I chose Windows Home Server, is that every day it automatically backs-up every client computer connected to the network. This works flawlessly with my three client machines being backed up regularly, giving a little extra peace of mind.

The WHS box also has folder duplication, so that important files are duplicated on two discs. Thus in the event of a single disc failure, no valuable data should be lost.

While the Linux server data is also protected in a similar manner, with its files being stored on a RAID1 disc array (meaning all data is duplicated across two identical drives), I have also configured it to backup its key data files across the network weekly onto the WHS box for increased protection.

As I completely rely on my computer systems and their data integrity, I decided to protect the two new servers with Uninterruptble Power Supplies (UPSs). For this function I bought two APC UPSs, both connected to their respective servers via USB so that the servers know when the battery backup is running low, enabling them to shut themselves down in a controlled and safe manner. 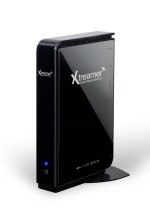 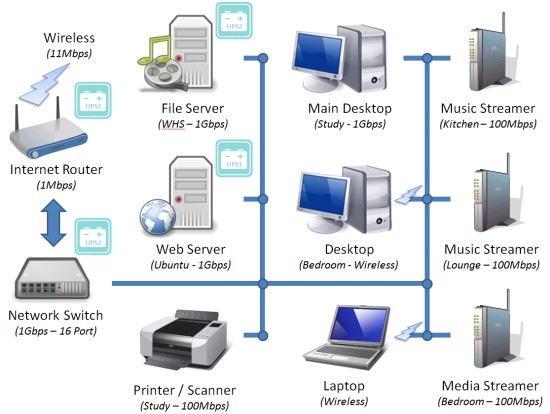 Every room in the house now has at least two network connection points, each giving access to:

After such an upgrade you’d think that my network would be complete for a while, but it doesn’t take long before the mind starts ticking over and improvements are sought.

The first immediate areas that I think require some attention are:

After that, who knows…